Researchers at École Polytechnique Fédérale De Lausanne (EPFL), a technical university in Switzerland whose students, professors, and staff from more than 120 countries are focused on three missions — teaching, research, and technology transfer — have developed a shoe sole with valves that electronically control the degree of pressure applied to the arch of the foot. The shoe aims to relieve the foot ulcers commonly caused by diabetes, helping lesions heal faster to avoid dangerous secondary infections that can result in amputations or even death.

The EPFL research team is collaborating with the Hôpitaux Universitaires de Genève (HUG) on the design and engineering of the smart shoe. The technology is based on actuators that electronically control the stiffness of the shoe’s sole in order to reduce onset of diabetic foot ulcers and prevent existing ones from worsening. 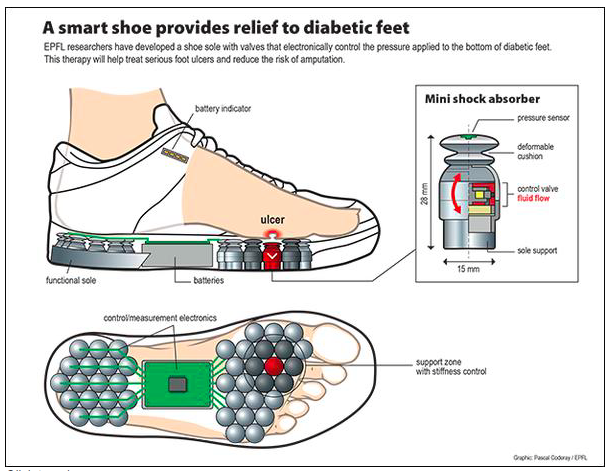 EPFL notes that each year, roughly 250,000 European diabetics undergo leg amputations with a mortality rate of 30 percent at 30 days and 50 percent at one year, and with foot ulcers as the initiating cause in most cases. Because the lesions, which result from vascularization and excess pressure, are for the most part not painful, they frequently get neglected and worsen, in part because many diabetics are unaware of how serious they can be and just continue walking normally, thus preventing the ulcers from healing. In many instances patients delay seeing their doctor until the ulcer’s depth reaches deeper soft tissues and ultimately bone, at which point the risk is high of secondary infection followed by gangrene.

The authors observed that infection develops in more than half of foot ulcers and is the factor most often leading to lower extremity amputations that are associated with substantial morbidity, reduced quality of life, and major financial costs. However, the researchers emphasized that infections can be successfully treated with optimal wound care, antibiotic therapy, and surgical procedures.

The EPFL scientists described the challenge diabetic ulcers represent for doctors as threefold. They need to first find a way to relieve all pressure from the ulcers as soon as they appear, then keep it off as long as necessary for the lesions to fully heal, and finally to quickly react to new ulcers, which can reappear at any time elsewhere on the arch of the foot. Addressing this challenge, researchers from EPFL’s Integrated Actuators Laboratory (LAI) at Neuchâtel came up with the idea of embedding the sole of a shoe with some 50 small electromagnetic valves filled with magnetorheological material — technology similar to that developed in the early 2000s by General Motors in partnership with Delphi Corporation for use in continually adjustable shock dampers (shock absorbers) in automobile suspension systems. Magnetorheological fluid (MR), also known as smart fluid, usually oil, typically contains 20 to 40 percent micrometer-sized magnetic iron particles which, when energized by a magnetic field, react to increase the fluid’s viscosity, restricting its movement proportional to the magnetic field’s power and intensity.

“We can control the viscosity of the material, which is made up of suspended iron microparticles,” explained LAI director Yves Perriard in a press release. “When we apply a magnetic field, the particles react immediately and align themselves with it, causing the material to change from liquid to solid state in a fraction of a second.”

When the fluid is not energized, the magnetic particles redistribute randomly in the oil carrier, allowing the fluid to move freely. This system can adjust the magnetorheological fluid’s damping characteristics up to 1,000 times per second.

That capability allows rigidity in different parts of the shoe sole to be controlled independently, depending on where sensitive areas and wounds are located, thereby helping the wounds heal more quickly and also helping prevent onset of new ulcers.

This invention provides several advantages, such as potentially simplifying diabetics’ day-to-day life significantly. “A number of other solutions exist, such as bandages and pressure-relief insoles,” observed the study’s co-author and HUG internal medicine specialist Zoltan Pataky, who originally hatched the smart shoe project. “But they are very restrictive and need to be constantly adjusted … and so patients are often reluctant to use them and doctors hesitate to prescribe them. The advantage of this shoe is that, in addition to relieving the arch of the foot wherever necessary, it immediately adjusts the pressure as some ulcers heal and others appear.”

A prototype of the smart shoe been completed, and the LAI lab is currently seeking industry partners to help further develop the project.